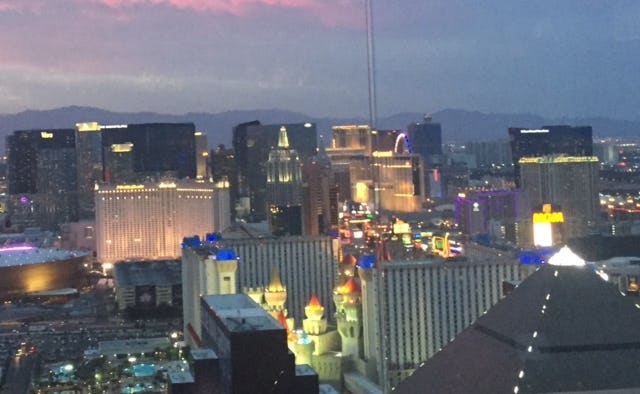 DevOpsWest is run concurrently with AgileWest and had a good mix of international and domestic attendees, who wanted to get better at software. As one attendee from Florida said “I’m not working at Google or Facebook because I want to be in Florida, but I still want to be as sharp and nimble as them.” And the fact that it allowed people from London and India to visit Las Vegas seemed to be a selling point too.

I enjoyed getting “out of the Silicon Valley” and hearing about how software companies are adopting best practices of DevOps and continuous integration/continuous delivery. One company built software for the construction industry, and even though their software was on-premise, had adopted best practices of DevOps and Continuous Delivery so that they could deploy daily if they wanted to. He said the discipline to make everything deployable had helped his whole team. A team in London told me how they’d gone on an extended refactoring project and reduced the number of lines in their code base from 35 million to 3.5 million lines. By eliminating stagnant, dead, unused code, they’d reduced complexity and allowed their entire organization to go faster. At their holiday party, they honored someone who’d deleted 5 million lines of code.

Anders Wallgren talked about Agile and Embedded System software. With over the air updates, it’s possible to be continually updating systems, as opposed to waiting for a manual update that was extremely unlikely. With great power comes great responsibility, and it’s important to remember that embedded systems are now controlling critical functions in cars.

My talk on “Effective Feature Flagging for Clean Deployments” had a good response, with a mix of people who were using feature flags already and wanted to get better at using them, as well as people who were interested in starting to use them.

I’d recommend DevOps West for anyone who wants to get a global view of use cases and patterns for DevOps.