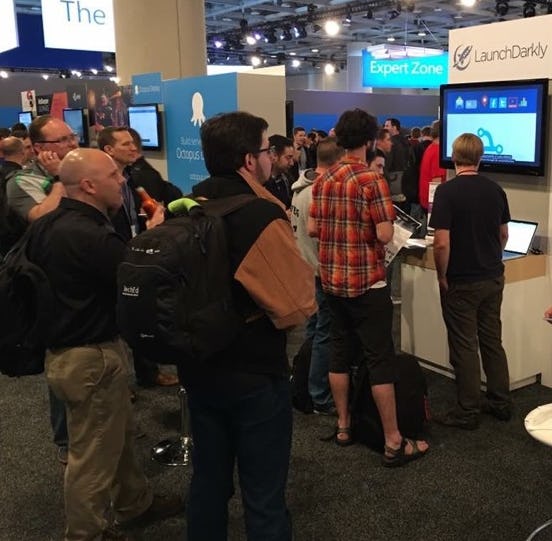 When Microsoft Visual Studio Team Services approached us about being a DevOps partner and presenting at their DevOps Keynote, I had a fair amount of skepticism and doubt. Was this the right audience for us? We’re a San Francisco startup making a continuous delivery platform, not a C# vendor. However, what we do - reduce risk for software teams - is universally applicable to anyone who makes software, and the partnership was an opportunity to reach new audiences. I’m glad that we are now a Microsoft Partner and participated at Microsoft Build - and here’s why.

It’s all about the customers! Current customers, prospective customers, either way, Build ROCKED. Current customers from Europe who’d I’d talked with many times over email or video chat were there, in person. Prospects who’d already heard of LaunchDarkly came over to ask questions personally. And prospects who’d never heard of us had an a-ha moment that “your feature flagging management is just what we’re looking for, I’m so happy to learn about you.” From Build, we have a motivated pipeline from the States, Asia, Australia, and Europe that are already planning pilots and proof of concepts. Could we have found this audience without Build? Sure. But it would have taken much more work to reach a highly motivated customer, with budget authority, reviewing the new technology she wanted to adopt.

Build was an opportunity for our whole team to “get out of the building” and hear straight from customers why they want to use us. As CEO, I try to convey to the team how excited customers are to use us, and how they feel that feature flagging fundamentally transforms development. But, there’s no match for an external CTO telling our Lead Engineer “You’ve built everything right; this is perfect!” Or seeing people queueing up six deep to get a demonstration.

Or running out of case study sheets on how we’re transforming software development and had to rush a job for more. The team came away energized about the work they’ve done and reinforced the requirements for our future roadmap.

Microsoft has had a reputation as being eager to dominate competition at all costs, but now there’s a new Microsoft. When I was demonstrating a prior product on television, we had to tape over the Apple logo on my laptop as the channel had a Microsoft exclusive contract where only Microsoft products could be shown. That said, I’ve never been an anti-Microsoft zealot. I use Microsoft Excel as no other spreadsheet gives me the control I need for financial modeling. I’ve programmed in Visual Basic. Microsoft PowerPoint is the standard I use if I want to share presentations with customers and partners.  When Microsoft approached us, I feared that they would want us to redevelop our own platform in .NET from Go and make us move from AWS to Azure. No such thing - they want to be a platform for ALL developers, not a .NET walled garden, and were delighted we had SDK support not only for .NET but Python, Ruby, PHP, JavaScript, Java, and iOS. Though Microsoft would have been happy if we wanted to move to Azure, it wasn’t a condition of the partnership. And when I demoed at Build, I used Chrome on a Mac. Microsoft at Build made headlines of “Cold day in Hell” by adding Bash support to Windows - truly, a new Microsoft. I was astounded by the new “Microsoft” who wants to build a substantial partner ecosystem.

Would I do Build again? Absolutely. Would I recommend it to another software vendor? Absolutely, for its incredible access to global software customers and the amplifying platform of Microsoft for how LaunchDarkly is powering DevOps for every team.